Twins pick up a game on Tribe after pinch hit, walk-off blast

With the Twins and Atlanta Braves tied 3-3 in the bottom of the ninth on Monday, Twins manager, Rocco Baldelli, turned to slugger, Miguel Sano, and had him pinch hit for first baseman Ehire Adrianza.

With a man on, Sano stood in and took strike one from Braves reliever, Chris Martin. The next pitch he hit 443 feet for a game-winning, walk-off home run to beat the Braves, 5-3. It was the Twins’ 70th win of the season. Even better: they increased their lead to four games over the Cleveland Indians after the Tribe were shut out by the Rangers on Monday. 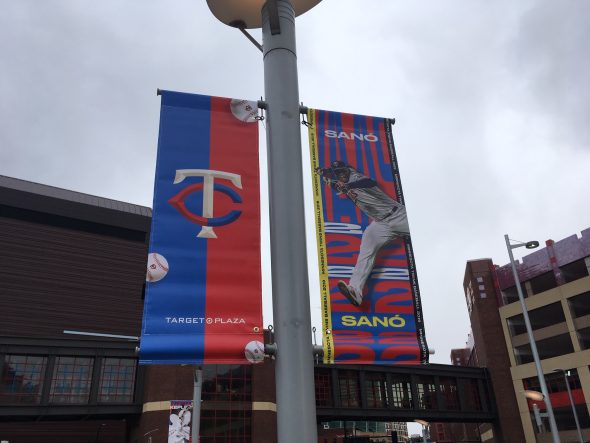 The win didn’t come easily for the Twins. Jake Odorizzi went six innings, but the Braves made him work. The Braves’ Freddie Freeman worked a 10-pitch walk in the first inning and set the tone for the rest of the game. When Odo was done, he had thrown 109 pitches.

But three relievers kept the Twins in the game and Trevor May got the win to improve to 5-3. Jose Berrios gets the ball on Tuesday.

-Sano’s blast was his 19th of the season and Max Kepler hit No. 31. Both drove in three runs. Who drove in the other runs? Infielder Luis Arraez, the most welcome surprise on the Twins this season. Arraez is now hitting .356.

-The last time the Twins hit a walk-off home run against the Braves? Game 6 of the 1991 World Series. We’ll see you tomorrow night!

-One problem about facing the Braves is that it means the Twins have to deal with third baseman, Josh Donaldson, one of the all-time Twins killers. Donaldson had two hits on Monday, but no extra-base hits.