Twins beat writer, LaVelle Neal, has an interesting story in the Strib, one that looks back (like we all are these days) at a Twins loss in late July 1992. Neal writes that it spelled doom for the Twins that season and became an omen for the rest of the decade. The Twins had only two winning seasons that decade, 1991 and 1992, before completely falling apart. The next decade, however, they had only two losing seasons.

In 1992, the Twins were still competitive (90-72) and found themselves in a tussle with the Oakland A’s for the division lead in the old American League West. Late in July the two clubs faced each other and the A’s pulled off a dramatic win over the Twins, getting a three-run home run from the unlikeliest player: Eric Fox, who played all of four seasons of major league baseball, and really couldn’t hit.

That’s the worst kind of loss, but is Fox really to blame for that season? Perhaps. But despite the loss in July, the Twins still finished the month with a winning record. In fact, other than a 9-12 start in April, the Twins had winning records in May, June and July. What would August bring? Maybe that’s the real culprit.

After July was done, the Twins took two games from the Brewers (the Brewers were still in the AL), then got ready to play the South Siders. It wasn’t pretty. They were swept, including a 19-11 beat down in Chicago that produced some ugly pitching lines. Bill Krueger got the nod for the Twins and was shelled, serving up seven runs in two innings. And it didn’t get any better. He was replaced by Willie Banks, a onetime highly thought of pitching prospect who never lived up to the advanced billing. The White Sox weren’t done and blasted Banks for 10 more runs. You get the picture. 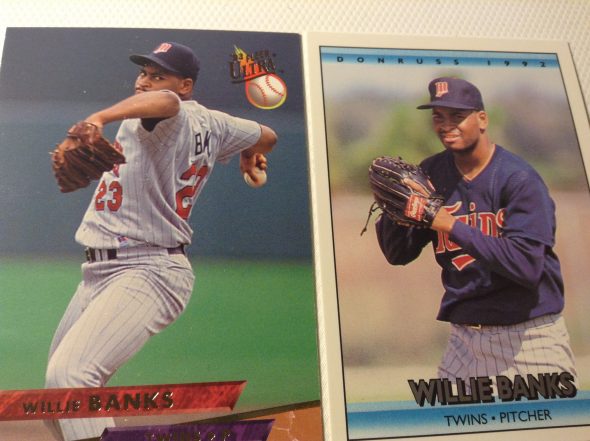 After the 19-11 loss, the Twins were tied with the A’s for the division lead. But by the end of August, the Twins were 6.5 games back. They finished the month with a 12-17 record.

Neal sums up the rest of the decade with this tidy paragraph:

Eight consecutive losing seasons followed from 1993 to 2000. Hrbek retired after the 1994 season, earlier than expected. Puckett retired during the 1996 season because of glaucoma. The roster was gutted in 1998 and ’99. The 2001 team provided hope, going 85-77 before contraction fears dominated the offseason headlines.

Yep, it was a lousy decade.

-Whatever became of Willie Banks? Banks was drafted by the Twins in the first round (third pick) of the 1987 draft. He spent three seasons with the Twins before being traded to the Chicago Cubs. The remainder of his career was spent bouncing around the majors, minors and abroad before he called it a career in 2002. Over that time, he was 33-39 with a 4.75 ERA. Banks lasted all of five outs in that loss to the White Sox.