Remember 1973? That was a wacky season for the Twins, Part 2

As I have written before here, the 1973 Twins encountered a little bit of everything it seems. They swept the eventual World Series-winning Oakland A’s to start the season — and went 14-4 against the club the rest of the way — yet they had a losing record against the 91-loss Cleveland Indians, struggled as usual against the Bronx Bombers and had no trouble with the abysmal 57-105 Texas Rangers. Yet when it was all over the Twins could do no better than 81-81 and a third-place finish in the AL West.

The season ended as strangely as it began as the Twins met a history-making Nolan Ryan during a final four-game series versus the California Angels. The series produced a record for Ryan and some bizarre pitching lines, a time when a pitcher could still go all the way, win or lose.

And Rod Carew was on 2nd when strikeout #383 took place in the 11th inning of his 41st game. Rich Reese was the final Ryan K victim. https://t.co/ou01bwqKIN pic.twitter.com/xf3hZ3UHRF

In Game 1 of the series, a 5-4 walk-off win for the Halos, the Twins drummed out 10 hits, turned four double plays and stole four bases, yet fell short in extra innings. Each team also scored three runs in the first inning. Do that today and there’s a good chance that both pitchers are yanked from the game. But in 1973 that’s not how baseball was played.

Twins pitcher Dave Goltz allowed three straight singles, walked a batter and gave up a sacrifice fly to give the Angels three runs. Halos pitcher Ryan served up single, walk, single and a double, and the Twins had their three runs. Ryan eventually struck out the side in the bottom of the first en route to a doozy of a pitching line. Ryan allowed four runs (three earned) on 10 hits over 11 innings. He also walked seven batters and struck out 16 to give him 383 on the season, a new single-season strikeout record that was one better than Sandy Koufax’s 382 in 1965.

The Twins won Game 2, 7-1. Pitcher Danny Fife, who made all of 14 appearances in his major league career, pitched a complete game seven-hitter, allowing one earned run with six walks and no strikeouts. Although he won that game, Danny Fife pitched more like Barney Fife in 1973, struggling with his control. That season he walked 29 batters in 51-plus innings. He also hit three batters and uncorked five wild pitches. If you can’t throw strikes…

In Game 3, another extra-innings win for the Halos, 4-3, pitchers entered the game and didn’t leave it. Twins pitcher Ray Corbin went 10 innings, while Angels pitcher Bill Singer, who improved to 20-14 after the win, allowed three runs, all earned, on 11 hits over 11 innings. He also walked nine batters (!) and struck out seven. Strange. The Twins’ Rod Carew went 3-for-3 at the plate.

And finally Game 4, the final game of the season, played before only 7,500 fans, according to Baseball-Reference.com. 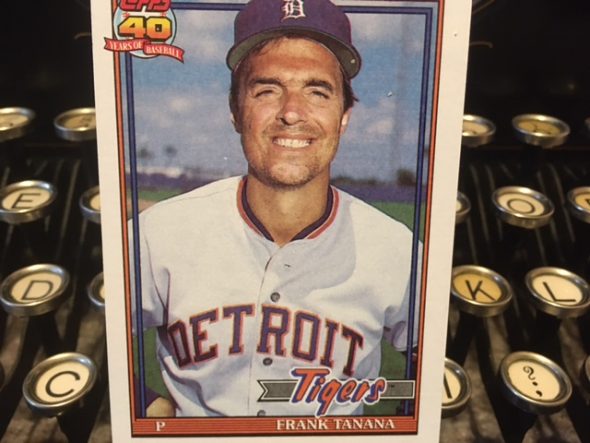 It was a match up of young pitching stars: 22-year-old Bert Blyleven and 19-year-old lefty Frank Tanana. Blyleven allowed three runs over eight innings, while Tanana went the distance, pitching a two-hit shutout with a walk and nine strikeouts. Tanana would go on to compile 240 wins over a 21-year career with more than 2,700 strikeouts.