I have a small but growing collection of Twins’ memorabilia: there’s Kirby Puckett’s rookie card, the license plate, the old pennant flag, the Brad Radke bobblehead, a Casey Fien-signed baseball, a ball with Frank Viola and Jack Morris signatures and the Johan Santana autograph.

The newest addition, which I received as a Christmas gift, is a Brian Harper action figure and baseball card. Harper was a good hitting catcher who played six of his 16 years in the majors with the Twins. And he was on some good teams, including the 1991 team that won the World Series. For his career, he hit .295. 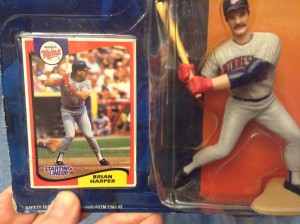 But more important to this Twins fan was that he played a role in making me even more of a fan when he hit a home run at the former Civic Stadium in Portland, Oregon, and this fan caught the ball.

I became a fan of the Twins after a friendly bet when I was about 11. Until that point, I wasn’t that interested in baseball until a friend of mine said that his California Angels would win a World Series before any team I picked in the old AL West. Not knowing any better, I selected the Twins as my team. I think they lost 102 games that year. Nothing was at stake, but the Twins slowly got better and won the World Series in 1987 and 1991. The Angels, meanwhile, wouldn’t win a World Series until 2002. I was a fan for life.

Helping matters was that the Portland Beavers became the Triple-A affiliate of the Twins from 1987 to 1993. And the Twins used to travel to Portland — my hometown — to play exhibition games, including Harper and his home run and Kirby Puckett and his arm, throwing out runners trying to take the extra base.

The Twins haven’t had a Triple-A connection to the Northwest since 1993. Before that, Tacoma, Washington, was the Triple-A home of the Twins from 1972 to 1977. Portland also was home for a team in 1971.

Harper retired from the majors after the 1995 season.