It’s official: I have seen the Twins play baseball at Target Field

There was no rain, baseball was played and the Twins finally beat the Cleveland Indians Thursday after losing the first two games of the three-game series. More important for me and my son: We got to see the Twins play after Wednesday’s game was rained out, resulting in a doubleheader Thursday. The Twins lost 9-3 in Game 1 and won 4-2 in Game 2, thanks to a Max Kepler home run, his 15th. 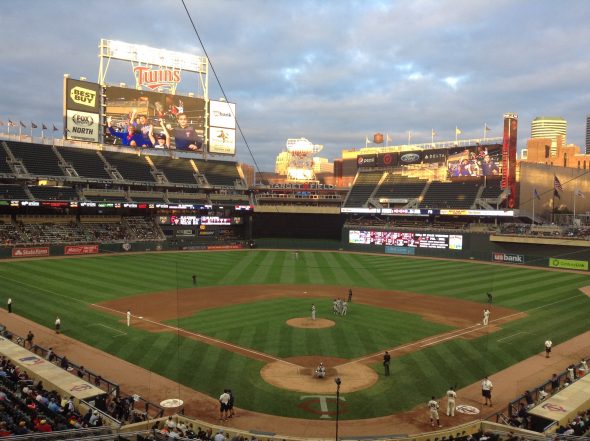 Kepler wasn’t in the starting lineup, but filled in for starting right fielder Robbie Grossman after Grossman collided with center fielder Byron Buxton during the game and fractured his left thumb, according to MLB.com. It was an odd play. It looked to be a routine fly and yet somehow they miscommunicated.

In addition to seeing the Twins play and win, Hall of Fame pitcher Bert Blyleven tossed us another autographed ball for the second night in a row. Thanks again, Bert!

Ervin Santana gets the ball on Friday. 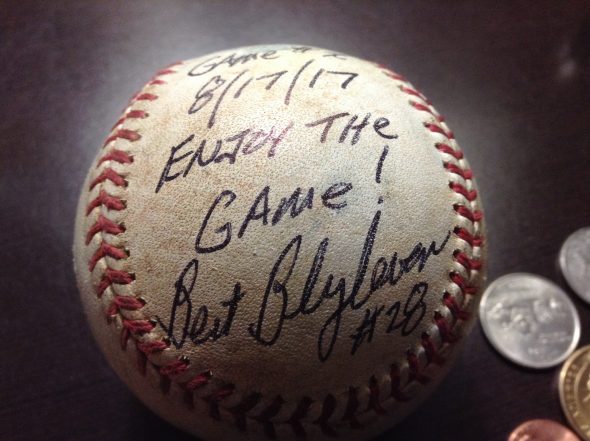 -Triple-A callup Aaron Slegers started Thursday’s game for the Twins. After the Indians scored 17 runs off Twins pitching in the first two games, Slegers limited the Tribe to two hits and two runs over six-plus innings. He came away with a no-decision after a blown save, but the bullpen held on to get the eventual win and save. Slegers is 6-foot-10.

-Before the game, we spent the afternoon at the Mall of America so that my son could indulge his interest in video games. The mall was built on the former Metropolitan Stadium site, so we tracked down the location of home plate. We found it: 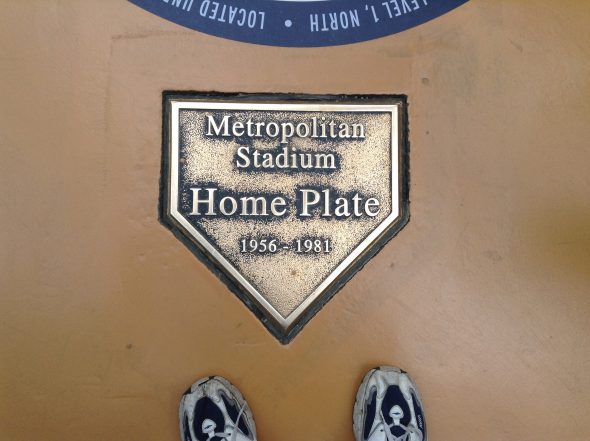 -Truth be told, my five-year-old son lasted only five innings before he wanted to leave Thursday’s game and play some baseball of his own. We purchased a Max Kepler bat and ball at the team store, then headed out to a patch of grass that sits outside Target Field near left field. That’s also the location of an outdoor TV monitor where fans can sit and watch games. We played ball while keeping an eye on Thursday’s action. Another father-and-son team joined us, so we had a batter, pitcher and two outfielders, and played baseball on a warm and breezy evening in downtown Minneapolis. It was a nice end to the day.