There is redemption. Just ask the Twins’ Eddie Rosario.

After left fielder Eddie Rosario made a mess of a fly ball in the Twins’ 14-4 defeat at the hands of the New York Mets on Wednesday, Rosie found himself on the bench to start Thursday’s game against the Oakland A’s.

But in the seventh inning, with the Twins down 3-1, Rosie pinch hit for outfielder, Jake Cave. With two men on, Rosario hit the first pitch he saw and drove it into the outfield seats for a three-run home run and a 4-3 lead. 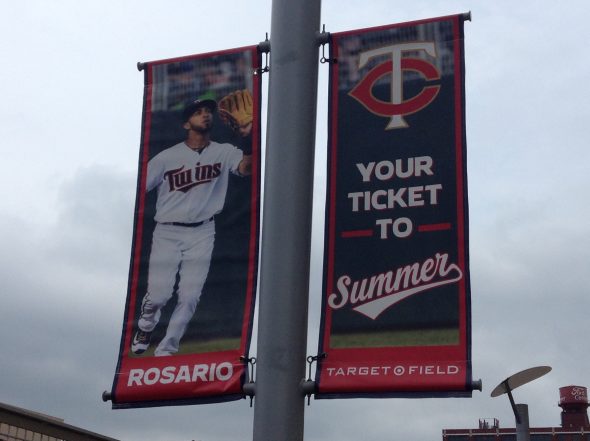 Rosie’s blast was infectious because his home run was followed by one from Mitch Garver and finally C.J. Cron for a 6-3 win. The win snapped the Twins’ first three-game losing streak of the season and kept the Cleveland Indians at bay. The two teams are still separated by four games.

After Rosario socked his home run, he shouted encouragement to his fellow Twins, according to MLB.com.

“I was just looking to give motivation to my teammates, trying to pump my teammates,” Rosario told MLB.com. “We weren’t hitting well this game. We were behind. I was just trying to keep everybody upbeat and together through the difficult times of the game. That’s what I was yelling at them.”

Kyle Gibson improved to 9-4 after he allowed three runs over seven innings with seven strikeouts and no walks. Ace reliever Taylor Rogers got the six-out save, his 14th. Jake Odorizzi gets the ball Friday. Keep on winning, Twins.

-I’m a little worried about Miguel Sano at third base after he committed his 10th error of the season on Thursday. But, speaking of redemption, he made up for it at the plate with a hit, two runs scored and two walks.

-Rosario’s blast was his 21st of the season. He’s now two behind team leader, Max Kepler. Garver hit his 16th and Cron, his 18th.

-After reliever Matt Magill suffered the worst of it in Wednesday’s loss to the Mets, he was designated for assignment on Thursday. Pitcher Kohl Stewart was recalled to fill his spot in the bullpen.