English author, Pelham Grenville Wodehouse, a widely read comic novelist of the 20th century who wrote nearly 100 books, but who also contributed lyrics to musicals and dabbled in Hollywood, became a baseball fan after he settled in the U.S. 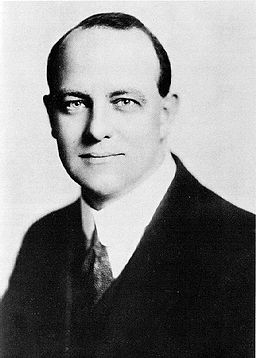 Wodehouse was essentially unwelcome in his native England after he unwittingly participated in what amounted to wartime propaganda for the Germans prior to the U.S. entry into World War II. After the war, he traveled to New York City, then finally settled in on Long Island for the remainder of his life. He became a U.S. citizen in 1955.

Although he spent nearly half his life here, his writing, if you’ve read his books or short stories, remained thoroughly British in outlook and temperament. And yet he eventually took to baseball.

Baseball writer Robert Creamer, in a book review for The Washington Post in 1996, said Wodehouse was a fan of the New York Mets.

Wodehouse in fact liked cricket, which he played and played well when he was a young man, just as he came to like baseball when he was an old man living on Long Island and rooting for the New York Mets.

If Wodehouse, who died in 1975, took to the Mets straight away then he witnessed some pretty lean years. In the team’s expansion year of 1962, the Mets won 40 games. Five years later they won only 61 games. But in 1968, the team, by then armed with future Hall of Famer Tom Seaver, began to turn a corner. They won 73 games that season, then went on to win the World Series in 1969.

Seaver wasn’t alone. Lefty Jerry Koosman, who won 222 games over 19 seasons, also spent 12 seasons with the Mets. If Wodehouse was thoroughly British, I guess one could say Kooz was thoroughly Minnesotan. Born and raised in Minnesota, he came home to play for the Twins in 1979 and won 20 games for the second time in his career.

He got off to a great start that season.

Kooz also won 16 games for the Twins in 1980. Highlights of that season included a three-hit shutout of the Detroit Tigers on Sept. 6.

-More confirmation that Wodehouse was a Mets fan. In a 2004 biography called “Wodehouse: A Life,” by Robert McCrum, McCrum writes that Wodehouse enjoyed baseball and boxing.

In old age, he had become a devoted baseball fan, and he also loved to watch boxing matches on television. … I am rooting hard for (Sonny) Liston, he said about one match. And he enjoyed following the inept exploits of the newly formed New York Mets.