Smith is the team’s new first-base coach, while Pickler, previously with the Los Angeles Dodgers, comes aboard as a coach who “will serve as a conduit between the front office and the coaches to convey analytics to the staff and players,” according to MLB.com.

Smith has spent 12 seasons in the Twins’ minor league system, including as manager. He has managed at Class A Fort Myers, Double-A New Britain, Class A Beloit and was the hitting coach for the Gulf Coast League Twins in 2005, according to MLB.com.

But Pickler’s role is more interesting because of his apparent middleman role between Molitor and Falvey & Co.

Here’s my sense of how this will all play out for Molitor:

Falvey & Co., likely through Pickler, will set lineups for Molitor and his staff, or at least provide the data needed to inform Molitor’s lineup decisions. What he does beyond that will be up to him, but I sense there will be pressure to evaluate the team’s play in new ways, or to let those around him use that data accordingly. That likely reduces Molitor’s role to in-game decisions, such as making pitching changes, putting the game in motion, challenging calls, etc. And I’m not sure that’s Molitor’s strength. For example, there was this game, in which Molitor somewhat inexplicably chose to load the bases late in the game and the Twins lost in walk-off fashion.

Will Molitor answer to the new faces and data around him or will he bristle at the lack of independence? We shall see. 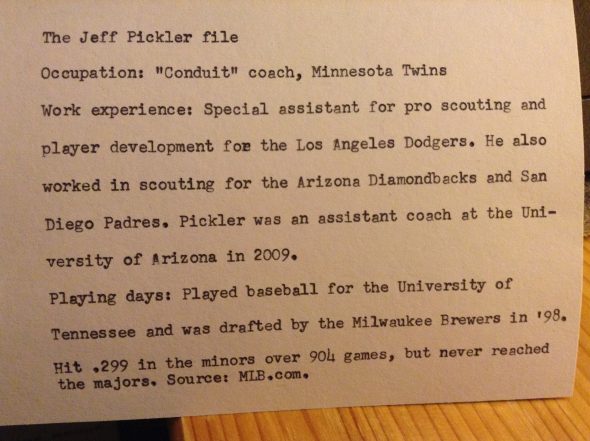