We made it to Minnesota, home of the Twins

We left Seattle aboard Amtrak’s Empire Builder at 4:40 p.m. Sunday and arrived in St. Paul at Union Depot about 9:30 a.m. Tuesday.

-It was crowded: Forty-five people got on at Whitefish, Montana, and the train was sold out from that point forward. The conductor had his hands full trying to mix and match seats for those couples and groups that wanted to sit together.

-We took advantage of smoke breaks: We don’t smoke, but we found a schedule near the bathrooms that highlighted the “smoke breaks” along the way. We got off and stretched our legs in Wenatchee, Washington, Havre, Montana, Williston and Minot, North Dakota.

-Yes, you can order pizza and have it delivered to a station: A guy on our train ordered Domino’s before we arrived at Havre, then jumped off during the break and met the delivery driver in the parking lot. He came running back with his pizza well before the train departed. Well, done, sir. I noticed he had pizza for dinner and saved some for breakfast.

-Eastern Montana: After the beauty of Glacier National Park, the remainder of the state is unyielding in its flatness. For hundreds of miles, it is nothing more than farmland, dotted by tiny towns all the way to the North Dakota border. It also acted as a reminder of just how big Montana is. It took us about 12 hours to cross the state.

-The oil patch is real: Once we crossed into North Dakota, it wasn’t long before the oil wells and gas flares of Williston began to show on the horizon. The Williston train stop was a busy one, and the community clearly has been changed by the oil industry, but it also wasn’t quite the sprawl of wells I imagined it to be. Yes, they are drilling for oil in Williston, but it’s not East Texas, circa 1930. There was a guy sitting in front of us, also from Olympia, on his way to interview for an oil-related job in Minot. 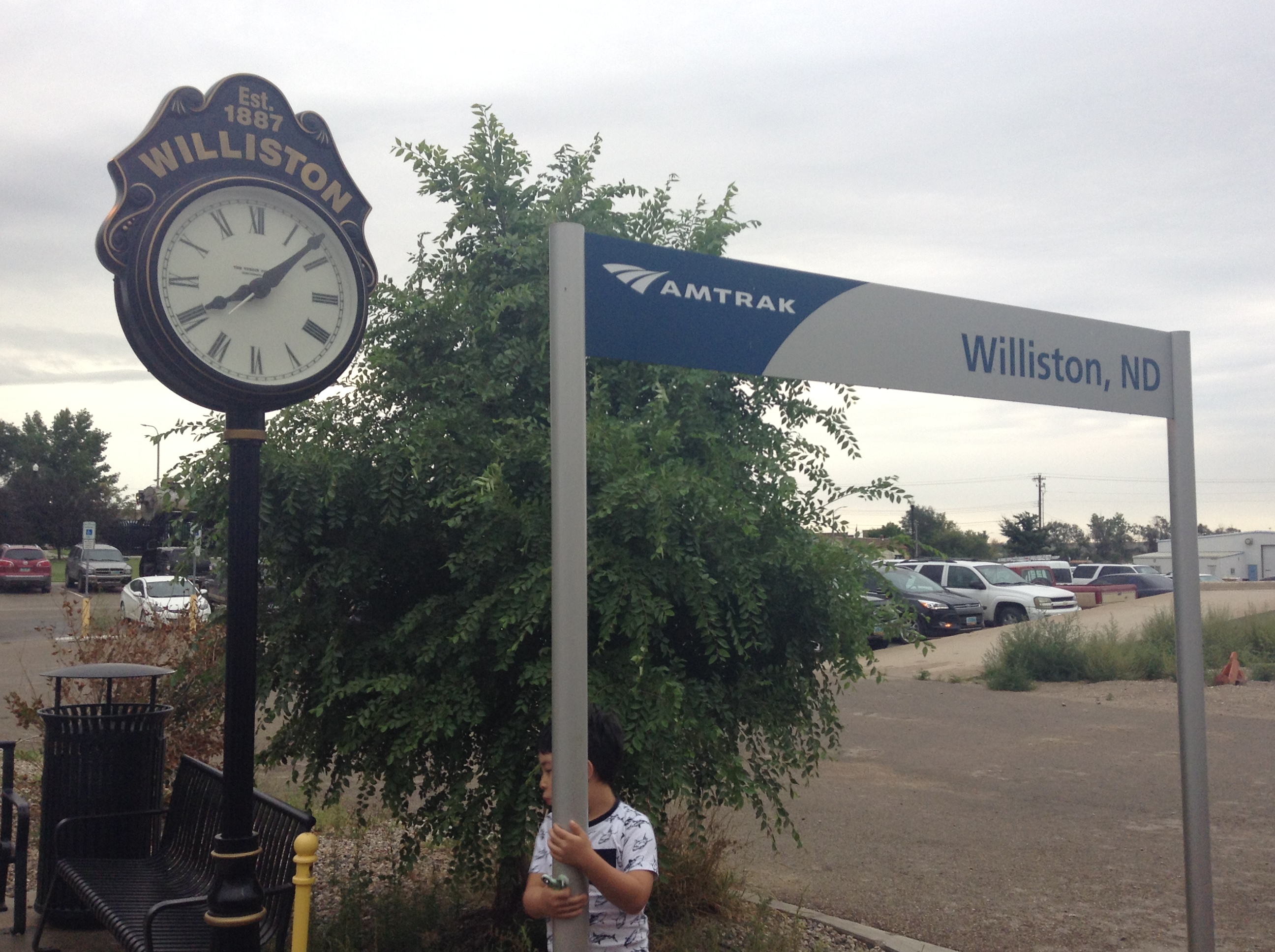 -Long delay in Minot: We’re not sure what the hold up was, but we were there for at least an hour, during which train power would go off and on. After that, the train seemed to barrel through the night to make up lost time and the engineer frequently used the horn.

-Strange delay in Spokane: We also had a long delay in Spokane, partly to connect with a train from Portland, Oregon. But the conductor also found himself trying to corral a family, who apparently didn’t want to sit together (or couldn’t), to make sure they got off at their destination: Spokane. It was then that the mother (grandmother?) began to complain about being mistreated, calling her real or imagined insult, “immoral,” and that she was going to “put someone on the news” in retaliation. She eventually got off the train.

-First impressions: Downtown St. Paul was surprisingly quiet. Union Depot is a neat old building, and “neat old building” doesn’t do it justice. On our way to east St. Paul, we passed through some beautiful neighborhoods. I hope to see more.

-The Twins took the series from the Detroit Tigers, but really needed a sweep because the Cleveland Indians continue to play well and are now five games up on the Twins and Royals. That could all change Tuesday, Wednesday and Thursday. That’s when the Twins and Tribe meet for a three-game series. A clean sweep and the Twins are right in the thick of things. A loss or two and it’s back to the drawing board.