When Round 1 went to the old-school Twins

Nineteen years ago the Oakland A’s were the talk of baseball, a franchise that had seemingly found a magic elixir that allowed them to win and win often with the tiniest of payrolls. A year later author Michael Lewis explained it all in a best-seller called “Moneyball.” Baseball would never be the same. 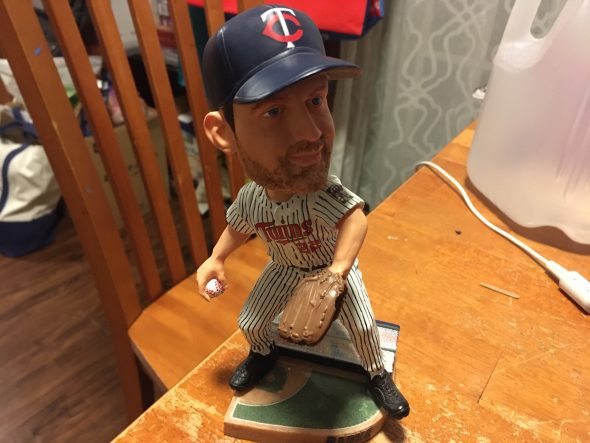 Surprisingly, Lewis hadn’t discovered anything new, he had just shed light on a team, a general manager and longtime baseball statistician, Bill James, whose deeper exploration into baseball stats, otherwise known as sabremetrics, had captured the fancy of Billy Beane and a new (old) approach to the game. The A’s were off and running in 2002, winning 103 games.

Meanwhile, the Twins were just trying to remain relevant to the game itself. After a decade of lousy baseball, the Twins, who showed slight improvement in 2001, were thought to be on the verge of being contracted right out of existence. Manager Ron Gardenhire replaced Tom Kelly, new talent replaced veterans and center fielder, Torii Hunter, made sure the Twins didn’t lose.

“So we decided that if that was gonna be our last time playing with each other, we wanted to leave it all on the field,” Hunter said in a Players’ Tribune post in 2016. ” We went out that year with a chip on our shoulder, with an attitude. We wanted to destroy everyone. We won 94 games that year. … We did things nobody expected us to do.”

The Twins burst out of the gates and never let up, including a second-half mark of 44-28, good enough to blow past the Chicago White Sox and win the division by 13.5 games. ESPN magazine put the Twins on the cover of their Sept. 30 issue and called them, “the team that saved baseball.” Despite the success, few teams in 2002 were crunching numbers like Beane and the A’s. The Twins, I think it’s fair to say, were still thinking and building teams by traditional means under general manager, Terry Ryan.

The Twins were 3-6 against the A’s that season, but after the A’s set the world on fire with a 20-game winning streak, guess who ended it? The Twins. On Sept. 6, 2002, the new-look A’s met the old-school Twins before 27,000 at the Metrodome, according to Baseball-Reference.com. On the mound for the Twins, career Twins player Brad Radke, who won 148 games over 12 seasons. Radke, who pitched to a slightly elevated career ERA of 4.22, still was known for his pinpoint control, effective changeup and durability, pitching 200 or more innings for nine of his 12 seasons. Two hours and 48 minutes after the game started, the A’s winning streak had come to an end, the Twins getting the 6-0 shutout. Radke went the distance, scattering six hits over nine innings with a walk and five strikeouts.

However, that wasn’t Round 1. Round 1 came in the postseason, the heavily favored A’s meeting the upstart Twins in the American League Division Series. If the A’s and author Lewis had captured the zeitgeist of millennial baseball, the zeitgeist was stunned when the Twins knocked off Oakland in five games. Two of those wins went to Radke.

Has there been a Round 2? In a sense, yes. The Twins and A’s have yet to meet again in the postseason since 2006 (the Twins were swept; my bad), and both teams have appeared in the playoffs an equal number of times (nine if we’re keeping score). But the A’s brand of baseball has spread throughout the league, including in Minnesota. GM Ryan was eventually let go and two adherents of sabremetrics, Derek Falvey and Thad Levine, were brought into the fold. How’s it going? The Twins have played mostly winning baseball, and so have the A’s. But neither team has won a World Series.

It was also the 100th win of Radke’s career. pic.twitter.com/UgEnDnpZTZ

Let’s check in on the 1984 AL West standings as teams come down the homestretch. #MNTwins pic.twitter.com/Yw0ptemzD1