Will home cooking be the difference in August for the Twins?

The Twins dropped two of three games to the San Diego Padres and now come home, as many in Twins Territory have noted, to play 20 of 28 games at Target Field in August.

But that might sound better than it actually looks, because although the Twins play the Detroit Tigers and Kansas City Royals this month, they also will welcome the Blue Jays, Giants and Red Sox to Target Field, plus they hit the road to play the always-tough Dodgers and Houston Astros.

They don’t survive the remainder of the season with their current pitching rotation and bullpen. Joe Ryan and Sonny Gray give the Twins their best shot at winning, but even they need to go deeper into games, and if they don’t, the team is forced to run deep on a bullpen that isn’t always up to the task.

So, will the Twins make a move before the Aug. 2 trade deadline? If they do, it appears it will be a last-minute deal, perhaps like the one they pulled off that sent lefty Frank Viola to the New York Mets on July 31, 1989. In return, the Twins got five pitchers including closer Rick Aguilera and starting pitcher Kevin Tapani. 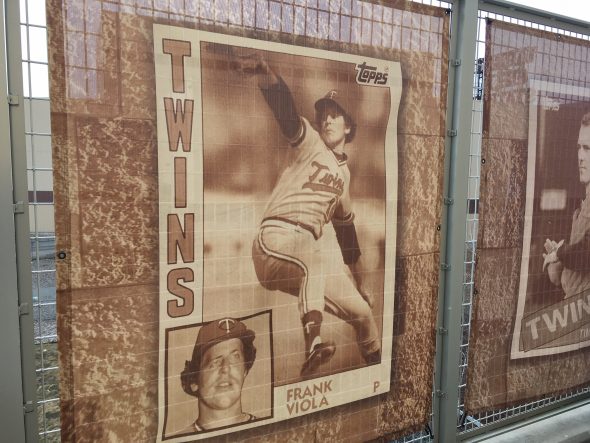 “It’s a shock for me,” Viola told the paper. “It’s the first time it’s ever happened. I have a lot of fond memories for Minnesota, the fans, the championship. But this is coming home. Now I have a chance to play for a team I grew up with.”

Although a shock for Viola and Twins fans, the deal worked out pretty well for the Twins. Aguilera went on to record 254 saves for the Twins and Tapani won 75 games as a starting pitcher.

The Twins face the Tigers on Monday. A pitcher has not been announced.

-The Twins are now 53-48 and have a one-game lead on the Cleveland Guardians in the AL Central.

-Old friend Jose Berrios improved to 8-4 on Sunday after he allowed one run over seven innings with six strikeouts in a 4-1 Blue Jays win over the Tigers.

-We went to watch Triple-A baseball on Saturday, seeing the Tacoma Rainiers take on the El Paso Chihuahuas. The El Paso team happens to be the Triple-A affiliate of the San Diego Padres, so we got to see former Twins left fielder Brent Rooker in right field. I’m surprised Rooker hasn’t been called up because he is hitting .272 with 19 home runs.

Rooker and Taylor Rogers were sent to San Diego in the deal to get starting pitcher Chris Paddack and reliever Emilio Pagan. Advantage San Diego.