Inspiration for this blog comes in many forms. This time, of all things, I ordered some stationery via eBay and it arrived wrapped in the front page of the Sept. 16, 1998, edition of the St. Louis Post-Dispatch. Who was on the front page? Who else? Mark McGwire after he connected for his 63rd home run of the season. 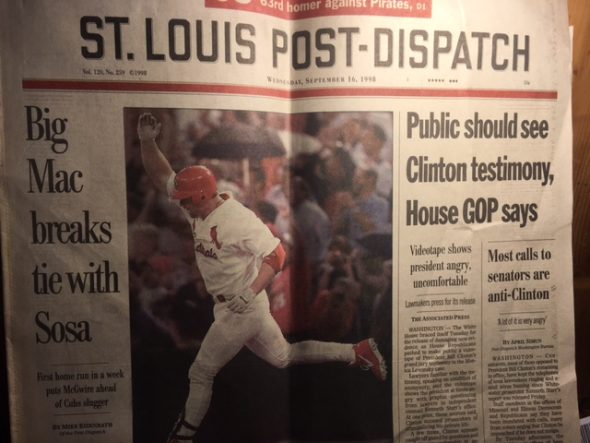 Yes, it was the Summer of ‘98, a baseball season credited with saving the game (or at least boosting interest and attendance) after fans turned away from baseball following  the World Series-killing strike of 1994.

Of course, we would learn later that the McGwire/Sammy Sosa home run battle wasn’t quite so innocent. For the moment, though, fans were thrilled by the prospect of soaring blast after soaring blast. In Minnesota, it was a completely different but familiar season for the Twins.

The 1990s were a terrible decade for the Twins. It started with an incredible World Series win in 1991, followed by a very competitive team in 1992, but then all was lost as the Twins turned in lousy losing seasons through 2000. And 1998 was no exception as the Twins lost 90-plus games and finished near the bottom of the table. In fact, the Cleveland Indians (now the Guardians) clinched the division on Sept. 16, 1998. Not only did the Tribe clinch, the Twins were stuck in the middle of a 10-game losing streak, the team’s longest of the season.

“They are the champions of the division. They are the best team in the division,” said Twins manager Tom Kelly about the Indians, the Star Tribune reported. “And I hope they represent the division well (in the playoffs).”

Days later, the 10th loss of the streak was a walk-off defeat to the Detroit Tigers. The Tigers’ Damion Easley homered off Twins closer Rick Aguilera to win it.

Kelly served up some lackluster stuff after this loss, too.

“It’s not like we’re getting manhandled,” he said to the Strib. “We have a good bunch of people here and they seem to bounce back and play better.”

The state of the Twins was not lost on beat writer LaVelle Neal. The faces are starting to get long in the clubhouse, he wrote.

“As Easley touched home plate with the winning run, several Twins players sat stonefaced in the dugout,” said Neal, who is still with the Strib as a columnist.

-Hall of Fame pitcher Gaylord Perry, who won 314 games over 22 years in the major leagues, died earlier this week at the age of 84. His brother Jim Perry, who won 215 games over 17 seasons — more than half of them with the Twins — is still with us at 87.

Gaylord Perry, of course, kept the baseball world off balance with the mystery of his spitball. Did he or did he not throw it?

According to the New York Times:

“Perry’s family, it seems, was as cagey as he was when asked how his pitches came to do such marvelous tricks.

“According to an often-told story, when Perry was pitching for the Giants during the 1971 postseason, a television reporter asked Allison, then 5 years old, if her dad ever threw a greaser ball.