Starter Hector Santiago lowered his spring ERA to 12.27 after a much improved effort against the Washington Nationals on Sunday.

Normally, an earned run average that high would be no cause for celebration, except that in Santiago’s case, his ERA was even higher after he was on the losing end of a 19-0 blowout loss to the Tampa Bay Rays.

Santiago was the starter for that game and lasted all of one inning while giving up five earned runs. He exited with an ERA of 45.00. But on Sunday he got things turned around by striking out five over two-plus innings in an eventual 4-2 Twins win.

Do yourself a favor and get over to Twinkie Town to read their tribute to former Twin and Hall of Famer Kirby Puckett, who passed away 11 years ago Monday. As part of it, they compiled memories of Puckett by those players, general managers and others in baseball who knew him best. It’s very well done. It’s also funny and sad, and by the end, I was trying to shield my tears from co-workers.

Here are a few of those memories, as compiled by Twinkie Town:

“During spring training in 1986, I was having lunch with Kirby [Puckett] and Tonya, who was then his fiancee. My wife was pregnant, and he asked if we had a name picked out. We said we didn’t. Then he asked if we knew if it was going to be a boy or a girl, and we said we weren’t planning to know that until the birth. He said, ‘Well, how about ‘Kirby’? That works for a boy or a girl!’

I jokingly said, ‘I’ll tell you what. If you’re hitting .350 by the time this baby is born, we’ll name him or her after you.’ As it turns out, he was hitting .372. My wife wouldn’t really go for Kirby; she had her heart set on Keith, which is her younger brother’s name. So we went with two middle names, and Kirby became the second middle name. But that is his legal, honest-to-gosh name: Keith Michael Kirby Costas.”

“When RD was traded to the Cubs, I don’t think we reacted too well. The charter flight from California to Seattle turned into a party. People got a little goofy. Puck kind of started it by singing ‘Jimmy Crack Corn’ as he got on the bus to the airport. And the singing continued most of the flight to Seattle. Puck went nuts with it. People started laughing at Puck, and when Puck got the floor, he didn’t give up. Harmon Killebrew, who was a TV analyst at the time, said it was the most bizarre thing he’d ever seen in baseball. He said it was like the team had been exorcised of a demon.”

“After we won in ’87, we opened one of those souvenir stores in a ritzy galleria. It had a glass door with the big Twins logo. I remember looking at the line to get in and there was a 5-year-old girl looking to get in and she touched the logo and said, ‘Kirby Puckett.'”

“My first fishing partner [in Minnesota] was Puck,” Guardado said. “First time we went, he said, ‘Meet me at 5 a.m. at Perkins.’ I figured, ‘There’s no way Puck is going to be there at 5 o’clock,’ but he was waiting for me, eating a cheeseburger.”

“We grabbed Puck’s hand, we told him we loved him, and Chili’s brother offered a great message of prayer,’’ Gladden said. “A few minutes later, they took Puck off life support.’’

“Kirby Puckett was the ultimate. That’s what everybody said about Kirby Puckett. I told my guys today at the meeting rather than mourn Kirby’s passing, I want everybody to shake hands with the guy standing next to him and ask themselves if they’re a good teammate.”

I read through that list again and here come the tears.

Thanks for the memories, Kirby. pic.twitter.com/MoOhCe1Cx1 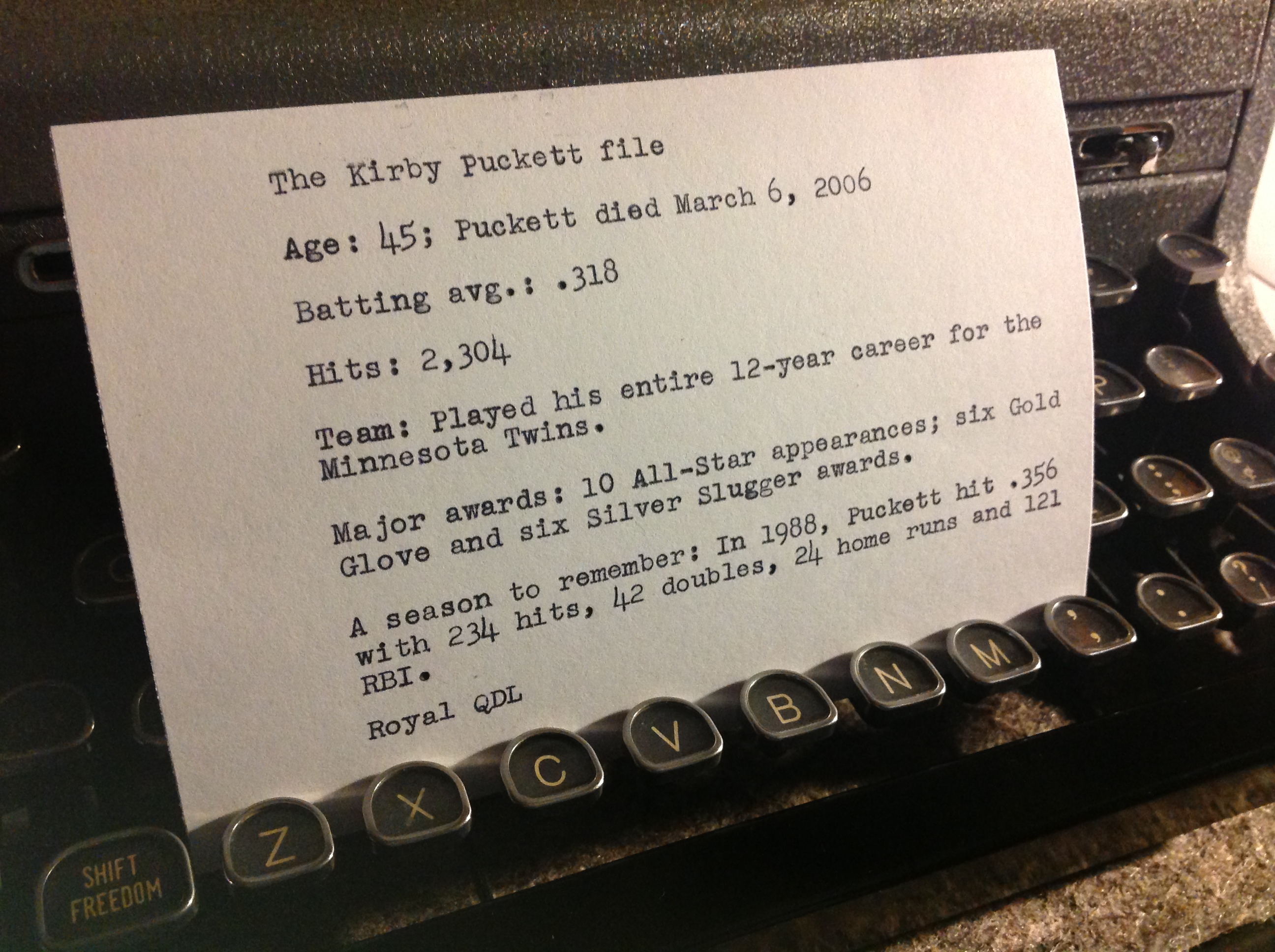