No, the Twins do not need Shohei Ohtani

Shohei Ohtani, the hard-throwing right-handed pitcher from Japan who also hits with power, is all the rage this offseason, with many speculating about which team will sign him and at what cost.

As for the Twins, they should take a pass.

I think Falvey & Co. already know better, but in case they need a reminder, here are my reasons: He will cost too much money — and that money could be better spent on proven free agents — his impressive baseball skills versus major league hitting and batting are a big unknown and then there’s the matter of track record. And by that I don’t mean Ohtani’s track record, but the Twins’ track record of success with ballplayers from the Far East, which is to say they haven’t had any success at all.

Yes, Ohtani has put up some impressive numbers: 42 wins in five seasons, a 2.52 ERA, 624 strikeouts in 543 innings pitched and a batting average of .286. But you know who also put up impressive numbers before arriving stateside with the Twins? Byung Ho Park and Tsuyoshi Nishioka. Nishioka is no longer with the team while the clock likely is ticking on Park.

(Update: Yep, that’s it for Park and the Twins. Twinkie Town reports that Park has signed a $1.4 million deal to play for his old club in South Korea in 2018).

Park hit 105 home runs over two seasons before signing with the Twins in 2016. He then hit .191 with 12 home runs for the Twins that season before being sent to Triple-A Rochester. He nearly made the team out of spring training this year, but eventually wound up in Rochester where he hit .253 with 14 home runs and 60 RBI. He also struck out 130 times.

Before Park, there was Nishioka, who hit .346 with 200-plus hits for the Chiba Lotte Marines in 2010. Yet after Nishioka arrived, he so underwhelmed the Twins there was some speculation about whether he even knew how to play the game.

The Pioneer Press also captured this moment the same season:

Playing second base, Nishioka fielded the first batted ball of the day and committed an error of epic proportions, trying to catch a high-hopper heel-up. After the ball bounced off his chest, he bobbled it a few times before trying to throw to first. While falling, he shot-putted the ball into foul territory. The play served as a GIF for the entire Nishioka experiment, though it wasn’t the end of a bad series.

The straw that broke the camel’s back came in the third game, when Nishioka lost a pop fly in the sun. Unable to find it, he threw up his hands, turned his back and walked away from the play, leaving Ben Revere to run in from right field and keep the runner at second. The play infuriated (GM Terry) Ryan, who addressed it the next day, saying, “That’s not acceptable.”

Of course, this isn’t to say that Japan and South Korea are incapable of producing quality ballplayers. Japan formed a professional baseball league in the 1930s that has produced its share of stars and hall of famers, and has welcomed American ballplayers since the 1950s. South Korea, too, has a competitive league and players that have caught the attention of U.S teams.

Perhaps I should just put it this way: The Twins have had no luck with ballplayers from Japan and South Korea, so don’t bother.

“He’s a unique free agent, but we don’t know a lot about him personally yet,” Levine said of Ohtani. “It’s exciting for us because we have a chance to sign a player like him. He’s a top priority for us.”

As I said before, I’m all in favor of the Twins spending money on proven free-agent pitchers, and I’ll be more than supportive if they can get one of the guys listed above and Ohtani. 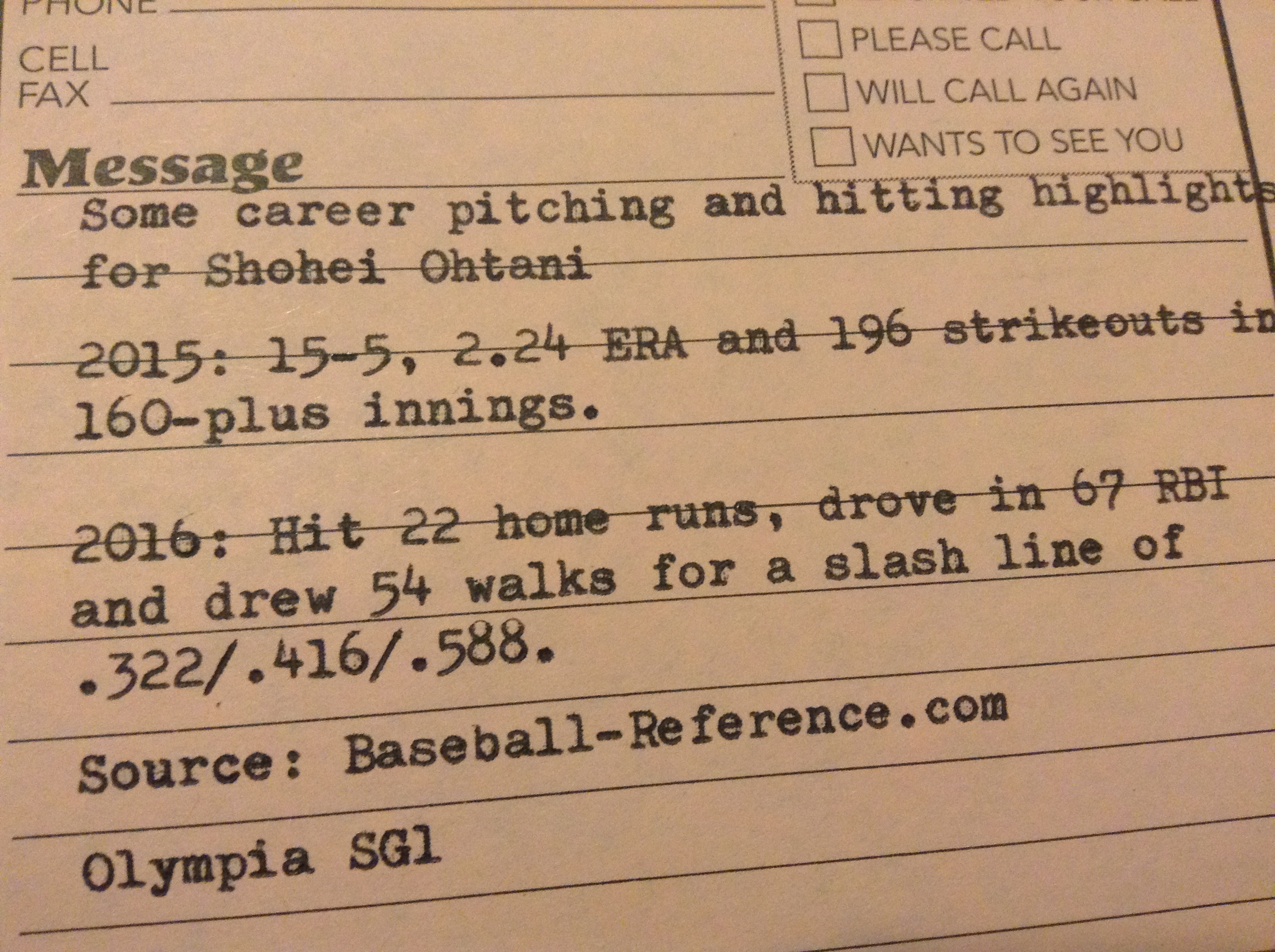