Despite some recent misgivings about whether pitcher Jack Morris deserved to be enshrined, the former pitcher for the Indians, Blue Jays, Twins and Tigers was elected Sunday to the Baseball Hall of Fame via the Modern Era committee. His former Tiger teammate, Alan Trammell, also was voted in Sunday.

Yes, as a longtime Twins fan, Morris deserved this moment because of his monumental Game 7 performance in the 1991 World Series between the Twins and Atlanta Braves. Morris went 10 innings and blanked the Braves 1-0 and the Twins won the series 4-3. It was the third World Series appearance for the Twins and the team’s second win.

There are other reasons: 254 career wins, three World Series appearances, 175 complete games, including 20 in 1983.

But I’ll admit my enthusiasm for Morris to be admitted to the Hall of Fame was somewhat tempered after I read about his sexist encounter with a former female sportswriter who died in 2016. Perhaps Morris paid the right price for those comments: He spent 15 years on the Baseball Writers Association of America Hall of Fame ballot and never advanced.

Meanwhile, anyone who digs around on this blog will find a post about Hall of Fame center fielder Kirby Puckett and how I argue that Puckett’s off-the-field indiscretions pale in comparison to the behavior of some other professional athletes. Well, that was wrong. Maybe it was easier to write that because Puckett’s career ended so tragically. But if Puckett had played out a full career, he may have been held accountable for those off-the-field indiscretions, and rightfully so.

Yes, both Morris and Puckett are Hall of Fame worthy players. They’re also lucky they don’t play the game today. The serious and important sexual harassment issues sweeping the country wouldn’t have played out well for those two. Zero-tolerance should have been the standard, but it wasn’t. Now it has to be.

-Morris and Trammell were admitted to the Hall of Fame on Sunday, but these candidates did not get in: Union leader Marvin Miller, Steve Garvey, Tommy John, Don Mattingly, Dale Murphy, Dave Parker, Ted Simmons, and Luis Tiant. There was quite a bit of social media disappointment about Miller not getting enough votes.

Alan Trammell getting in is the VC at its best: honoring an all-time great the BBWAA just missed.

Jack Morris getting in is the VC at its typical: inducting a player who, while very good, clearly fell short of HoF standards.

Marvin Miller not getting in is the VC at its worst.

-Although Luis Tiant is best known for his years with the Boston Red Sox, Tiant pitched for the Twins in 1970. 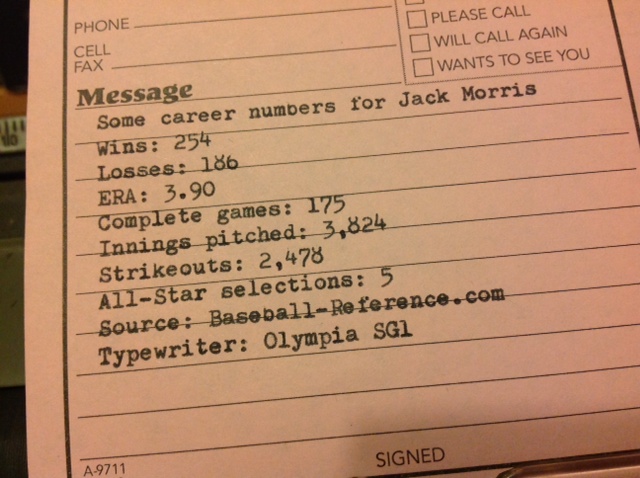