Winding down the Twins’ season with ugly series loss to Tigers

The Twins assured themselves of back-to-back losing seasons on Sunday after they lost 5-2 to the 93-loss Detroit Tigers. They also lost Saturday to hand Motown the series win.

All that’s left is the search for silver linings and the Twins had one on Sunday with the major league debut of pitcher Simeon Woods Richardson, who came to the Twins in the trade that sent Jose Berrios to the Toronto Blue Jays.

Woods Richardson looked OK, but it would have gone a lot more smoothly if the Twins hadn’t committed three errors in the first inning. He finally exited after five innings. He allowed three runs (two earned) on three hits, including a home run, with two walks and three strikeouts.

Former Twins prospect Alki Baddoo, now a member of the Tigers, also goofed on what sounded like a routine fly ball and then things got really weird after Twins reliever Trevor Megill bounced a ball off the ground during his warmup pitches that hit catcher Ryan Jeffers in the neck.

And then Twins manager Rocco Baldelli removed Megill from the game.

In comments to reporters after the game — according to the Bally Sports North coverage — Baldelli was focused on Jeffers when his infielders and members of the Tigers’ bench alerted him to Megill’s situation. He apparently experienced some muscle tightness, and although Megill didn’t want to come out of the game, Baldelli lifted him to avoid serious injury.

“As I said earlier, this has been a strange one,” said Twins radio play-by-play man Cory Provus during the game.

Bailey Ober gets the ball Monday.

-Woods Richardson is the 13th player to make his Twins debut this season, which, of course, is a reflection of the team’s injury problems.

-Another reflection: The Twins were 1-for-11 and left 18 men on base in the two losses to the Tigers.

-Rookie Jose Miranda has 66 runs batted in this season, the most for a rookie since Kent Hrbek in 1982. 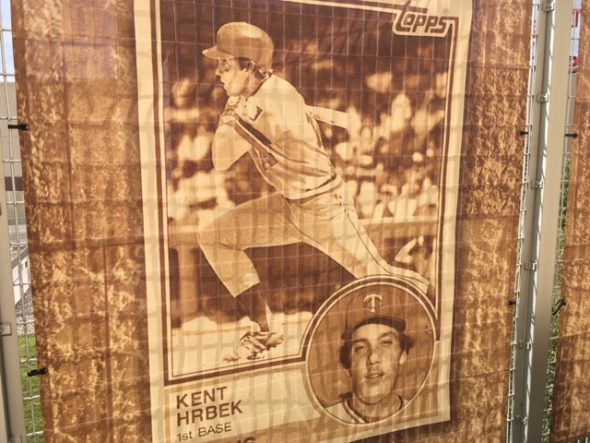 Some highlights: During a three-game series at Texas in early September, Hrbek went 5-for-14, scored five runs, drove in four more and smashed three home runs. And in July, the only winning month for the Twins that season (14-13), Hrbek went 4-for-5 with a run scored and an RBI in a 3-0 win over the Milwaukee Brewers on July 8, 1982.

-In 1988, following a 3-2 win that attracted about 35,000 fans to the Metrodome, the Twins became the first team to surpass three million fans in attendance in the American League. Why is that? No surprise: The Twins won the World Series in 1987 and followed it with 91 wins in ‘88. That’s how it’s done, folks.

Back-to-back losing seasons is bound to have the opposite effect. And it did, the Twins finishing 20th in attendance out of 30 teams in 2022.